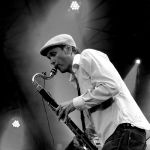 He is best known as a frontman with his own band Brink Man Ship. He toured all around the world and played on festivals in Asia, North America, Russia, Africa and Europe.

tour in germany, austria and Switzerland with Aly Keïta and Lucas Niggli

JMO-tour in switzerland, Austria, and Germany with Moussa Cissokho and Omri Hason

tour in Switzerland with Aly Keïta and Lucas Niggli

tour in China with Aly Keïta and Lucas Niggli

Premiere with my solo project: jan galega Brönnimann and optickle

JMO-tour in Israel with Moussa Cissokho and Omri Hason

tour with Aly Keïta and Lucas Niggli in Germany, Switzerland and the UK

tour in China with Wang Wenwei

CD Recording with A.Spell in the Zoo in Berne

Festivals in Rumania and Serbia with Brink Man Ship

Tour in Burkina Faso with the faranas and Baba Salah

Tour in Germany and Poland with Brink Man Ship

Artist in residence in capetown Southafrica in november/december

tour in Switzerland, Thailand and Austria with Brink Man Ship and nya

Tour in jamaica with the four tenors

Tour with brink man ship in Germany, Canada and Switzerland
Composition for "science et cité" in the festival "conscienza- gewissen - conscience" (May 24, Kornhaus Bern)
Concerts with "Ja, ich will" (music for 2 computers and bass) with Benfay

Componist and Musician at the Dance-Company Running Out
Cd-releasetour with prêt-à-porter
Tour with Brink Man Ship in Finland, Poland, Estonia, Slovakia
Feldkirchfestival with Kenny Werner

Cd-recording and tour with Herdsmen and Swine
Concerts with the own trio feat. Marco Figini
Cd-recording with Isaac Biaas and the Soul Babimbi