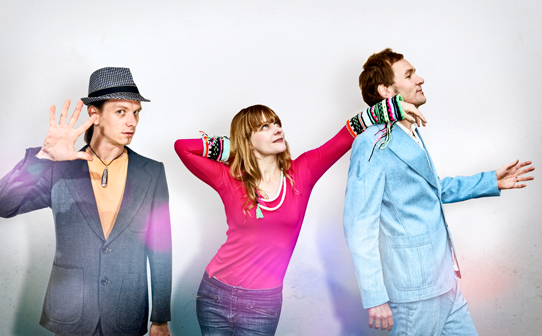 The Swiss-South African trio A.Spell is one of the most exciting discoveries of the recent music scene. Urban, yet exotic, fragile and bombastic in the same breath; A.Spell put a spell on their audiences from Cape Town to Hamburg, from Maputo to Moscow.

‚A. Spell’ have found a trio where each musician complements the other perfectly. The band comprises of Vocalist and Accordeon player, Nadja Stoller, Bass Clarinet player and elctro wizard Jan Galega Brönnimann and the Percussionist, Tabla and Didgeridoo player Ronan Skillen from Cape Town, South Africa.

With the release of their debut album „Where The Strange Creatures Live“, A.Spell bring music where lyrically and structurally the songs are given special contexts within which they unfold in their own spacial feeling. Unfamiliar combinations of instruments and rich variety are specialities that are endlessly intriguing. Bass Clarinet and Tabla combined with playful electronics and a provocative Accordeon are the foundation for an otherworldly Voice soaring high above, reminding us of mystical beings, secrets behind mountains of snow and a forgotten pair of shoes.

‚Where The Strange Creature Live’ is a journey through surreal dreamworlds.

A. Spell’s line-up is intriguing:

Jan Galega Brönnimann has been on the scene for years and known for his innovative and cutting edge collaborations. As a composer and instrumentalist he has worked with the likes of: Nils Petter Molvaer, Sidsel Endresen, Pierre Favre, Saadet Türköz, Eddie Floyd, Round Table Knights and Kenny Werner. He is best known as a frontman with his own band, Brink Man Ship.

Ronan Skillen has been exploring a fusion of tabla, percussion and didgeridoo by means of a hybrid percussion kit which he designed. This demonstrates a rich textural variety and a unique versatility which he uses in musical genres across the board. Recent collaborations include Babu, Tonik, Johnny Clegg, Freshlyground, Hot Water and Rodriguez.

Three strong musical personalities with a common thread come together and manifest in an unmistakeable sound landscape. At times soft, then loud and disorientating yet never without focus and rather, mindaltering.

A Bernese-South African band that will turn heads all over the planet.
Der Bund, Ane Hebeisen

A.Spell do exactly as their name suggest: they put a spe on you.
Bewegungsmelder

Possibly the collaboration of the year!
Kulturagenda

A.Spell is original and absolutely unmistakable within their music as well as with the individual band members. They deliver their repertoire convincingly, ranging from trip-hop, folk and techno.
Neue Zürcher Zeitung, Ueli Bernays

A hybrid of pop and electro jazz with a potent and extremely successful album that sways between songs and sounds.
Berner Zeitung, David Loher

People that live on a wider musical horizon will prick their ears with this band. The band open new doors to vast exciting plains.
Tracks, April 2013

This trio enters the stage and enraptures the audience! Energetic and original.

A refreshing, big sound that entertains the crowd for a solid hour with an intrigue. Not necessarily a household name yet, but certainly well on their way to becoming so, possibly because of the very fact that their genre defying presence is so mysterious.
Music-on-net, Gerald Langer, Juli 2013

Crunchy electronic beats and percussion combined with bass clarinet and a fragile yet warm voice belonging to Nadja Stoller are all part of a surprising soundscape tapestry. 'Golden sunlight sneaking into my mouth', a definite reflection of her sound as well as in her own lyrics.
Der Bund

At last it was A.Spell's turn. The trio blended mysterious sounds and was balanced perfectly between the old pillars in the park, Nadja Stoller in the very centre. Soft blue light complimented the sounds of didgeridoo, accordion and bass clarinet. Even the rain that briefly graced the open air setting added it's luster and didn't seem to phase the +-4000 people listening.
Berner Zeitung

A.Spell create music that seems to originate in the jungle and translate best in the forests of the big city, blending a diversity of cultures. Archaic sounds are urbanized and enhanced by organic sounding electronics which all combined, mange to transport listeners to spherical far away places.
Kulturagenda, Basil Weingartner