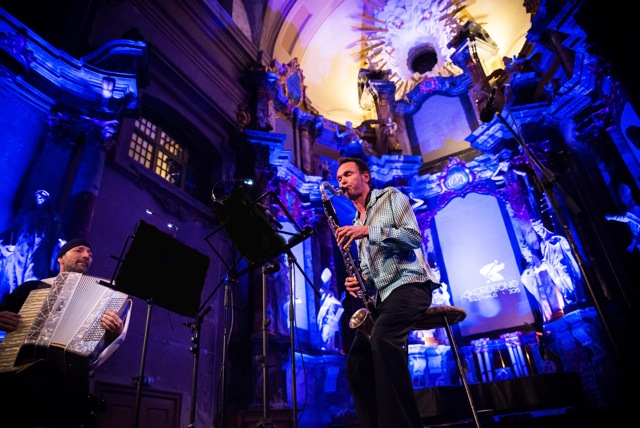 In Duo with the bass clarinettist Jan Galega Brönnimann Antonello Messina presents a new program dedicated entirely to the music of the country where he was born. They play some of the great Italian “canzoni” from the 60s, 70s and 80s, which are well know by everyone in Italy. These chart-toppers were sung by

The Italian accordionist, pianist and composer Antonello Messina is a dynamic presence in the new international jazz scene and has been so for several years. He has toured and recorded both alone and as a sideman, taking part in more than forty musical and theatrical productions, short movies and film music. His numerous performances across Europe as well as his collaborations are greatly praised by both the public and the critics. Antonello Messina has played and recorded with: Paul McCandless, Kenny Kotzwitz, Reggie Johnson, Umberto Fiorentino, Ettore Fioravanti, Massimo Manzi and many others.

Jan Galega Brönnimann was born in Cameroon, West Africa. He has been on the scene for years and known for his innovative and cutting edge collaborations. As a composer and instrumentalist he has worked with the likes of: Nils Petter Molvaer, Sidsel Endresen, Pierre Favre, Saadet Türköz, Eddie Floyd, Round Table Knights, Baba Salah, Aly Keïta and Kenny Werner. He is best known as a frontman with his own band, Brink Man Ship.